Maybe you know the feeling: you’re on vacation with your family, sitting by the pool – and you’re constantly worried about not paying attention for even a moment. Is this fear unfounded? Sadly, no. A total of 236,000 people drowned worldwide in 2019, and children are especially at risk.[1] Wouldn’t it be nice if the little ones could help themselves in an emergency? In this blog post, you’ll learn how children can be taught exactly that starting when they are as young as 6 months old.

In Germany, children usually learn to swim at the age of 4 or 5 – quite late, in fact, when you consider the numbers. After all, things can happen very quickly at the pool or the lake. Alina, a passionate swim teacher, was eager to change this situation and opened the Otterkids swim school. The Otterkids learn using unusual methods but are all the more successful for it. The children aren’t simply tossed in, as you sometimes hear, in the hope that they’ll somehow keep their heads above water. No, Alina begins very cautiously, but her step-by-step approach is precisely why she is able to start so early. 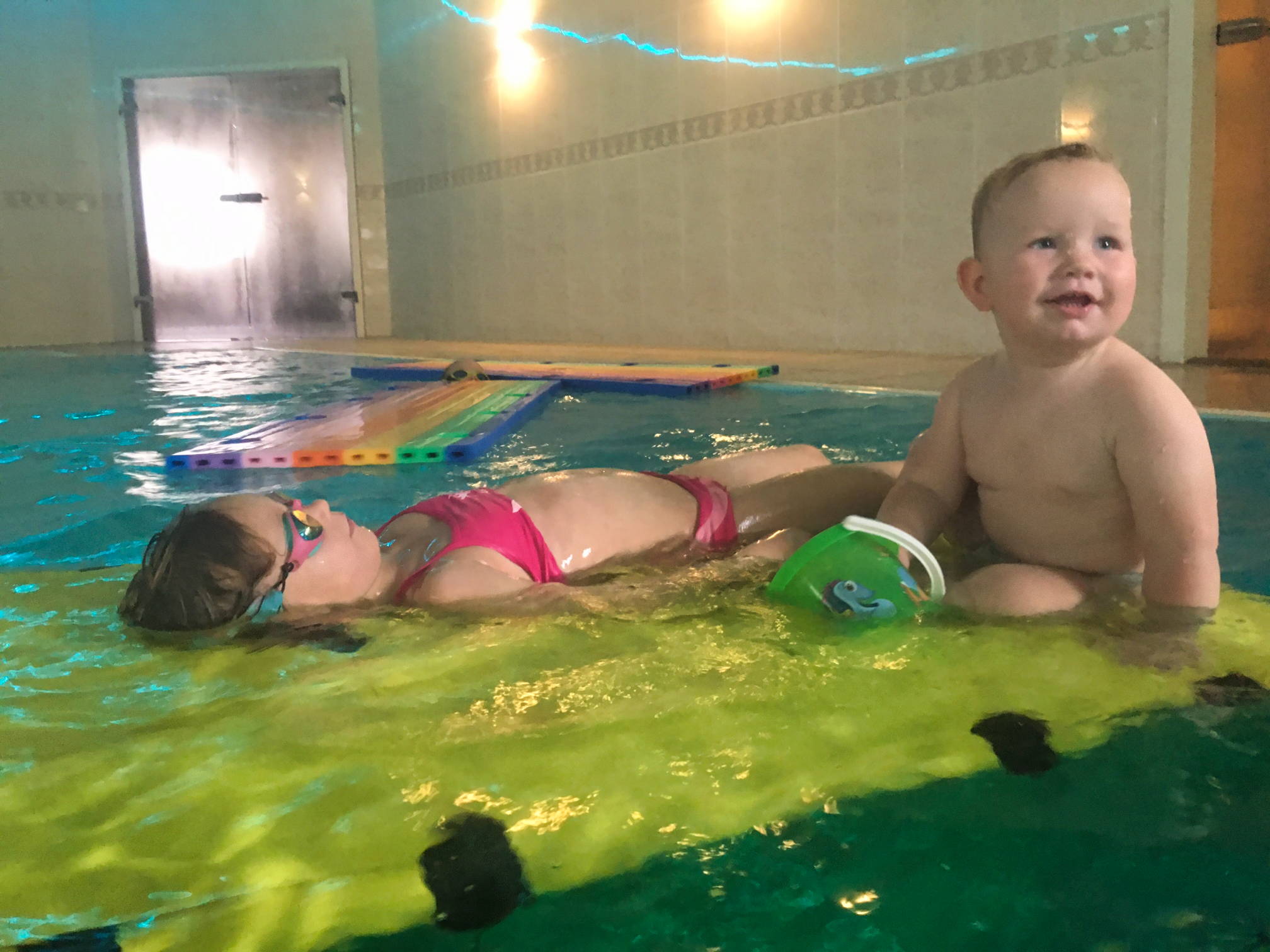 Some of the children who take swim lessons with Alina have had little contact with water before or are afraid of this unfamiliar element. Munchkins like this are allowed to paddle and splash around for a while before things get “serious” – then it’s time for them to learn how to save themselves. Sounds complicated, but it’s really not. It simply consists of turning onto your back in the water to catch your breath – and then floating like this, allowing yourself to drift until help arrives. In the introductory course, which any child six months of age and above can participate in with their mother or father, dry exercises above the surface of the water are the first thing on the agenda. The main skill they learn at this stage is how best to roll over onto their back. After that, parents and children get in the water, with Alina explaining and the parent and child practicing what she says together. It’s a truly intensive training session, because while Alina walks around giving tips here and there, the families continuing practicing. That’s why one half-hour session is enough; it’s also about the same amount of time that a child can concentrate for at that age. Then one day, after numerous lessons, the child reaches that magical moment when they can float on their back by themselves, trust in their own abilities, and often even discover their love of water. 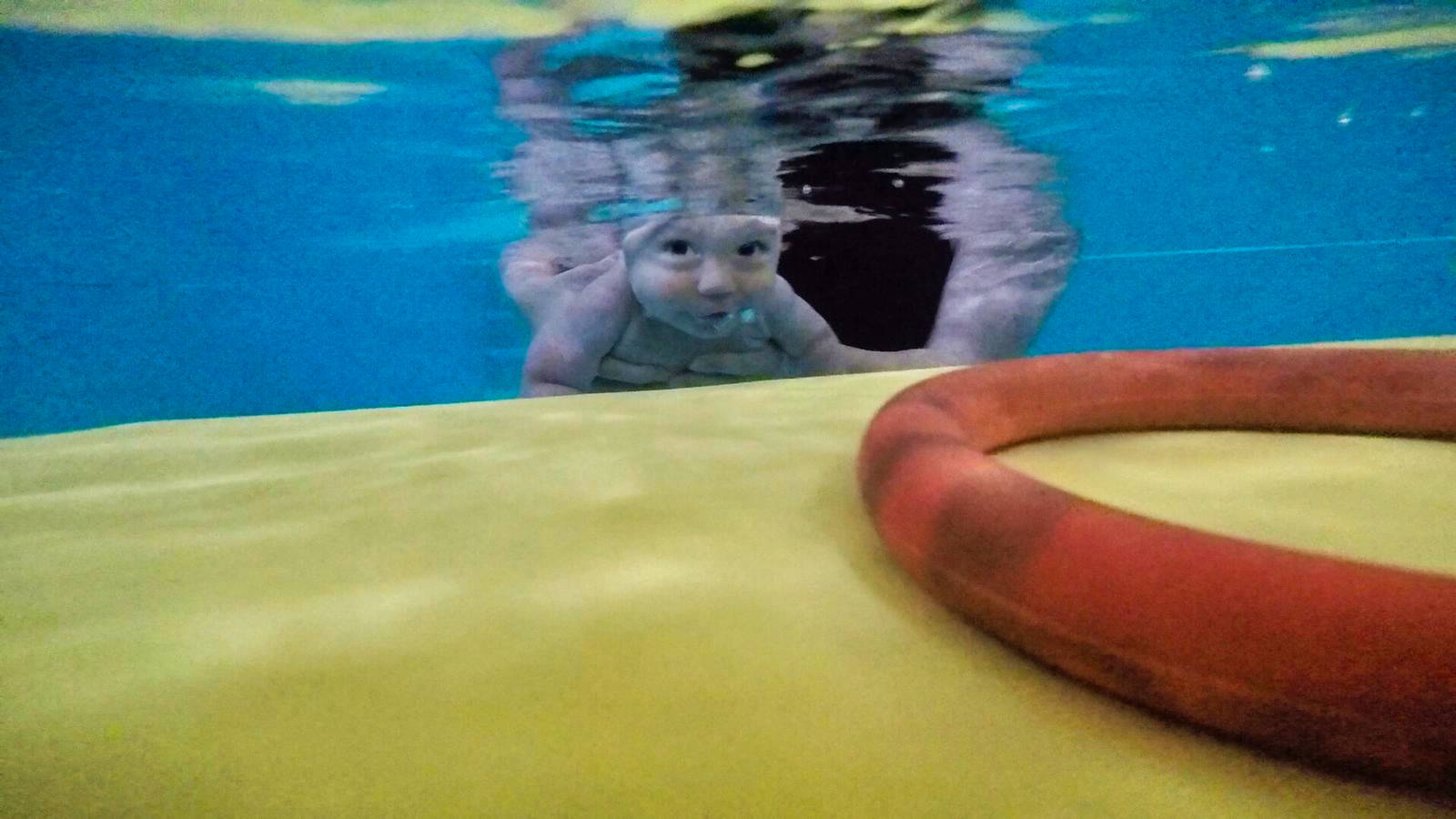 This method is predominantly used in the US, where lots of people have a pool in their backyard – meaning it’s especially important that children here can swim. This is because swimming accidents are more common than you might think, even in shallow water. A child that falls into a pool or lake and hasn’t practiced what to do in the water beforehand is simply overwhelmed by the situation and has no idea what steps to take. They haven’t learned what to do to get out of the situation. And that’s why in the US, the Netherlands, Switzerland, and England, for example, you can find many children that begin taking swim lessons before their first birthday. In Germany, the concept of learning to swim at such a young age is still relatively new. 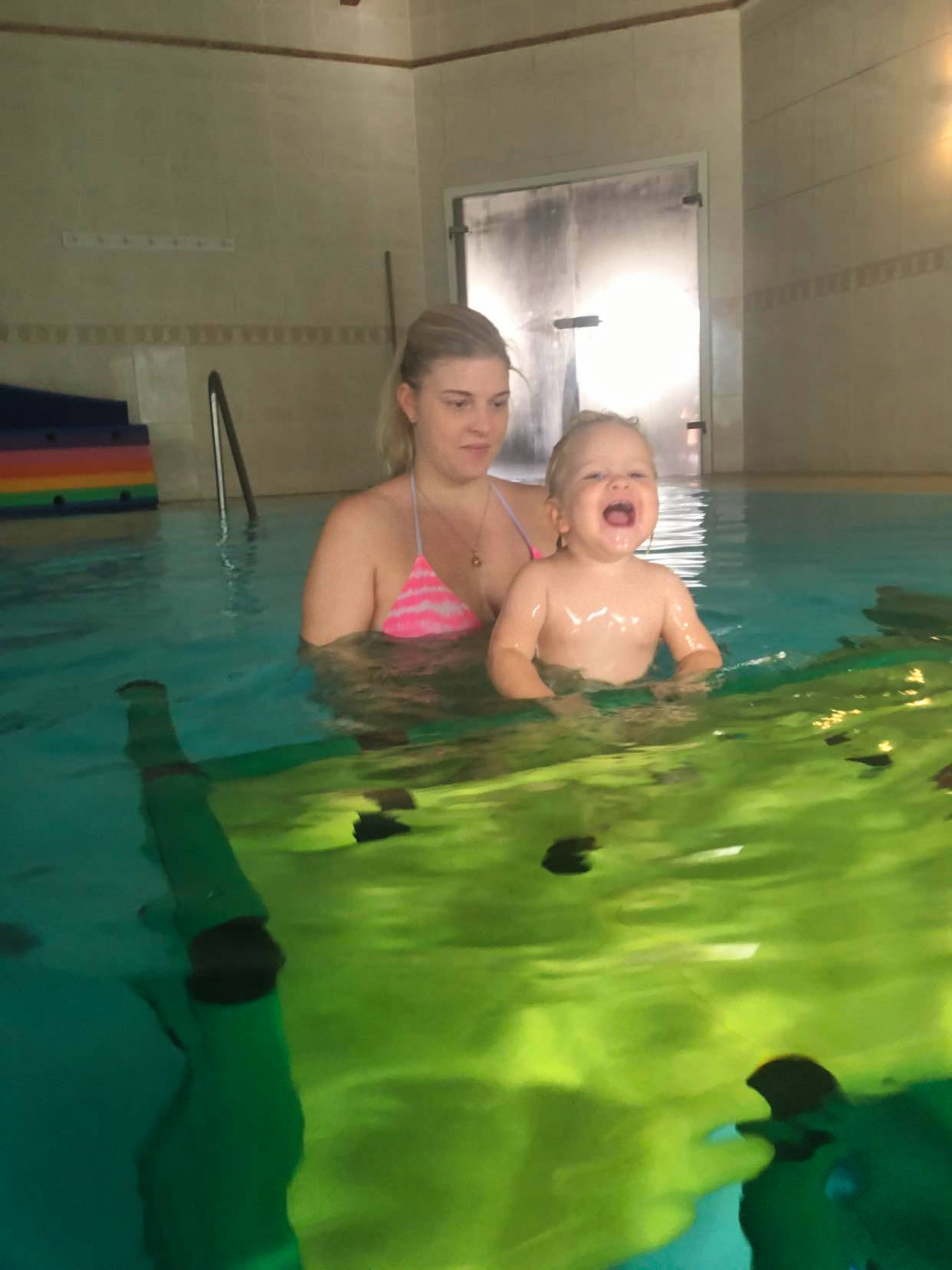 When a child can save themselves and passes the test, they can continue to practice without mom and dad. Once they have started walking, they can also learn to crawl – amazing, but true! Although in this case we’re referring to the swimming stroke known as the front crawl. This is because the movement of the legs when doing the front crawl is similar to the movement when walking. The child leaves their arms out of it for the time being, either resting them against their body or stretching them out so that they form a kind of arrow that drills its way through the water – whatever suits them. In the process, they keep their head under water. In this way, the child learns to maintain a horizontal position, because that is the most suitable for moving around in the water. As soon as they run out of air, the child turns onto their back again, just like they learned to do before. Or they can immediately do the backstroke, which is also far less strenuous than the breaststroke, for example, and most importantly, is a stroke that all children actually can do. 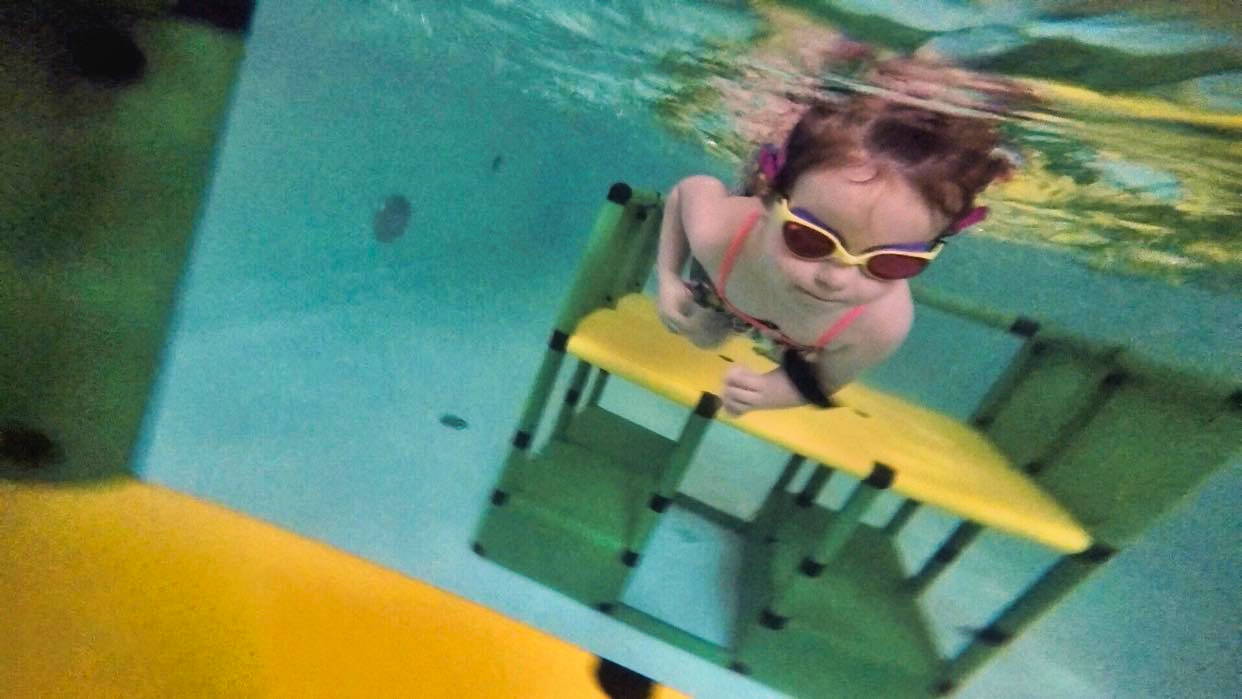 Gradually, the children learn to replace this full turn onto their backs with simply taking a breath when turned to the side, as is common in the “real” front crawl. Finally, when they’re between the ages of three and five, they add their arms into the mix. If the little ones still want to continue with swim lessons – and they usually do! – the traditional swimming strokes come next, although they practice these using a clever system known as the “Smart Fish Method.”

In this process, the swim instructor breaks down each movement into individual components and the children practice each one separately. For example, the children are sometimes given fins so that they don’t have to expend as much energy using their legs and can focus more on their arms. Only once they have mastered all the individual components are they put together to form a whole. This way, they learn the movements correctly from the beginning and have a much easier time swimming later on. To ensure that all this methodology doesn’t get in the way of having fun, Alina uses slides, boats, tippers, and other equipment, because she knows that children learn best when taught in a playful way. 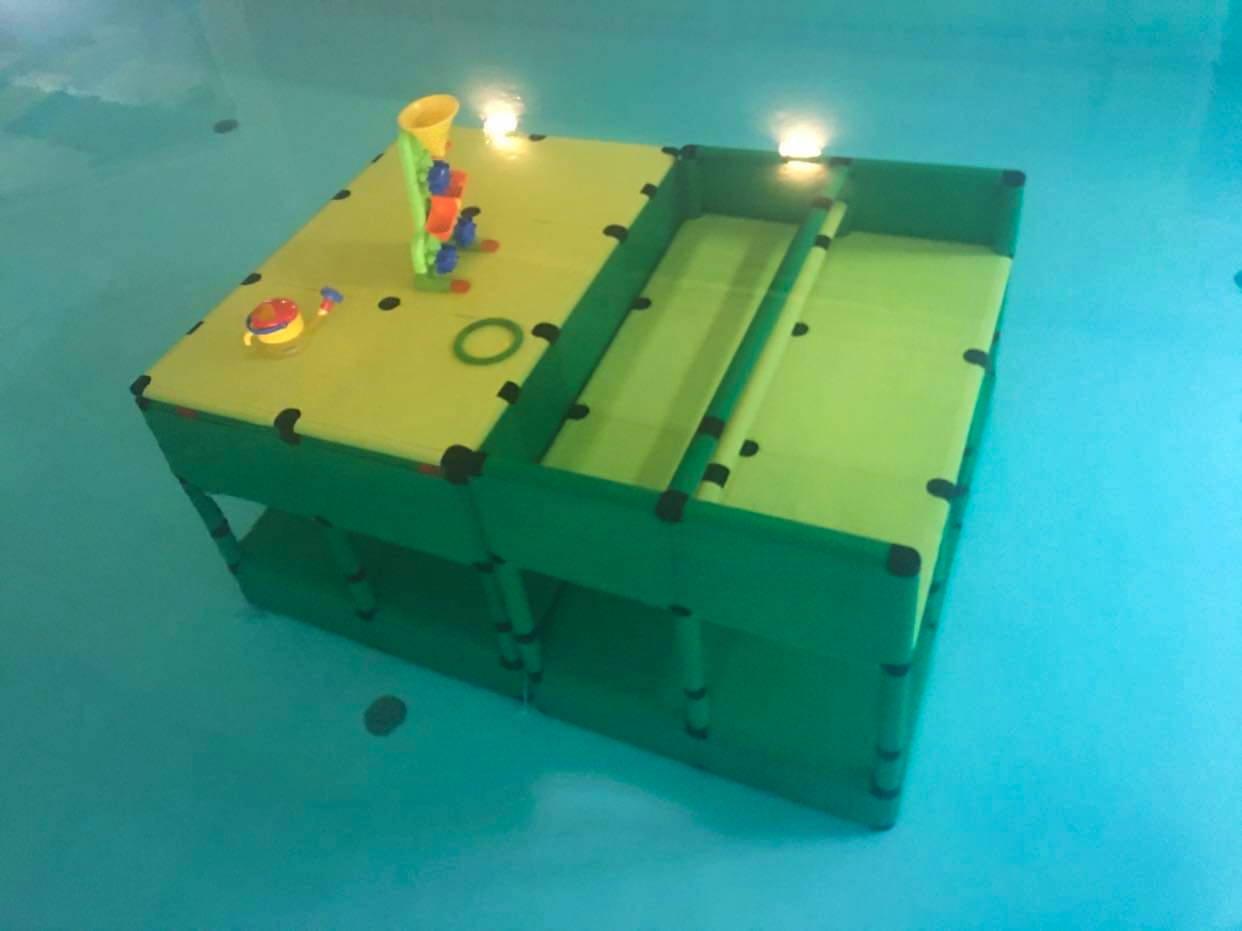 That is also why Alina recently added two QUADRO Aqua platforms to her inventory. The children taking swimming lessons couldn’t believe it when they saw the jungle gym in the water for the first time – some of them had only ever seen one in their backyard! They immediately liked the color. And they finally had something to look at and head for while they swam. This made it easier for them not to stick their heads out of the water. 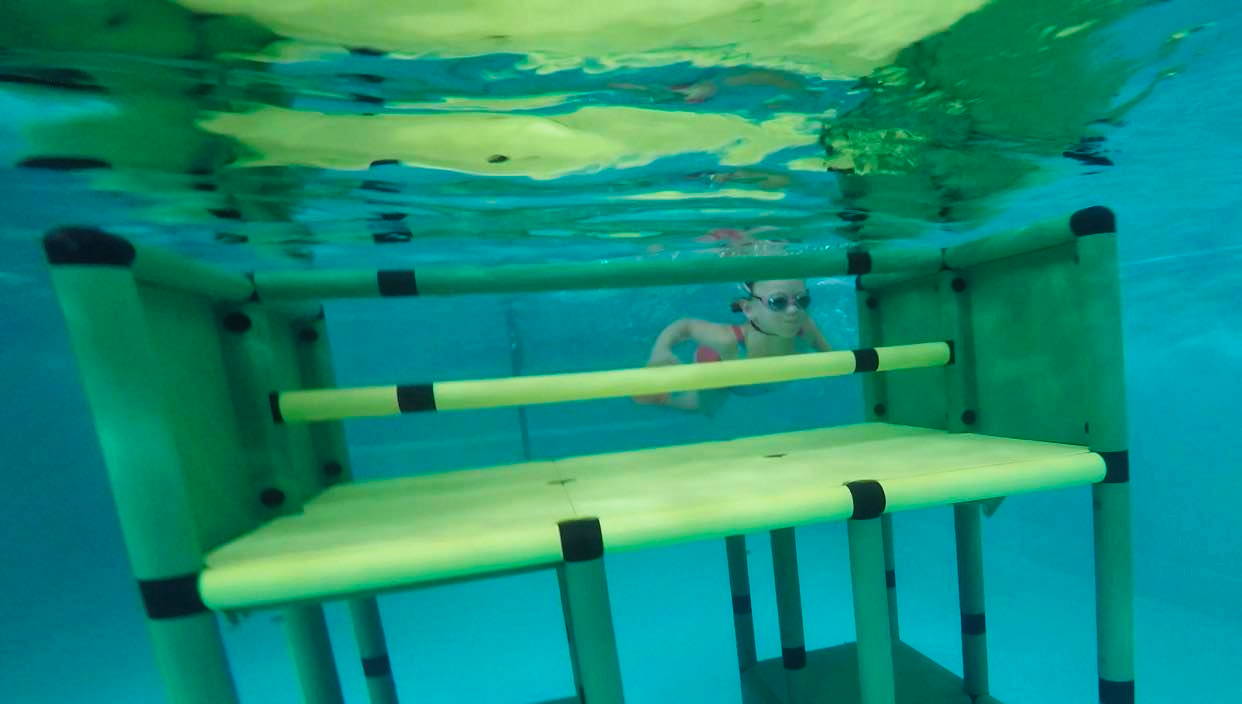 Alina had already tried this before with other underwater structures; something was always wobbling, however – the designs simply weren’t stable. But since she’s had QUADRO, she’s more than satisfied. The two platforms are easy to assemble, and weights on the bottom of the pool ensure that the structure doesn’t float to the top. After the lesson, Alina can easily take the jungle gyms out of the water again because they’re so light.

One of the two structures has a kind of plate that can be easily mounted and removed. We custom-built this for Alina based on her specific needs. This makes it possible to choose different heights to suit different age groups. The higher platform is for children who are more afraid. When the children sit on it, it’s almost like sitting in the bathtub at home. This height is also good for the children to practice rotating. 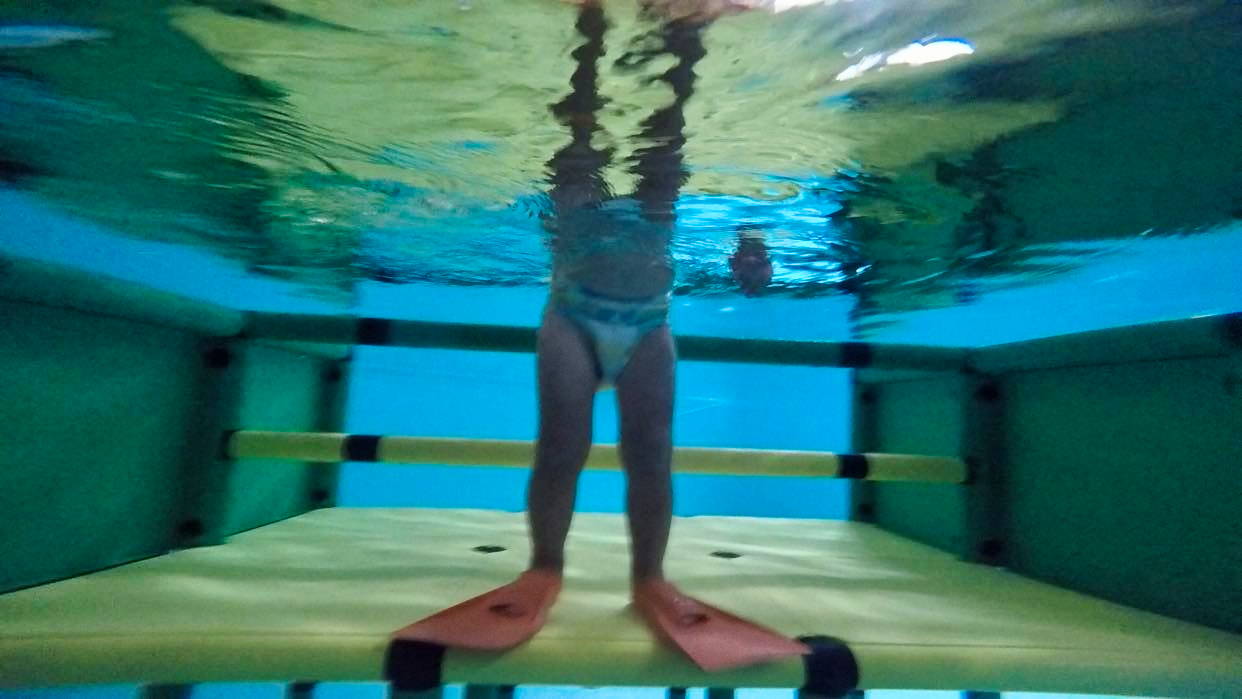 If you remove the upper platform, you have a structure suitable for older children. Both levels, which form a kind of intermediate floor, reduce the distance to the bottom and make it easier for novice swimmers to get used to the depth.

Alina became familiar with this method of swim instruction during the ten years she spent in the United States, and was immediately a fan: “In Germany, people usually start with breaststroke. I don’t think that makes sense. This is because first, your legs sink as soon as your head pops out of the water, and second, you need a great deal of coordination to swim breaststroke. Many kids who try it, for example, lack the entire gliding phase, which is an important part of many different swimming styles.” That’s why she teaches an effective rhythm as much as anything else once her students begin learning traditional strokes. 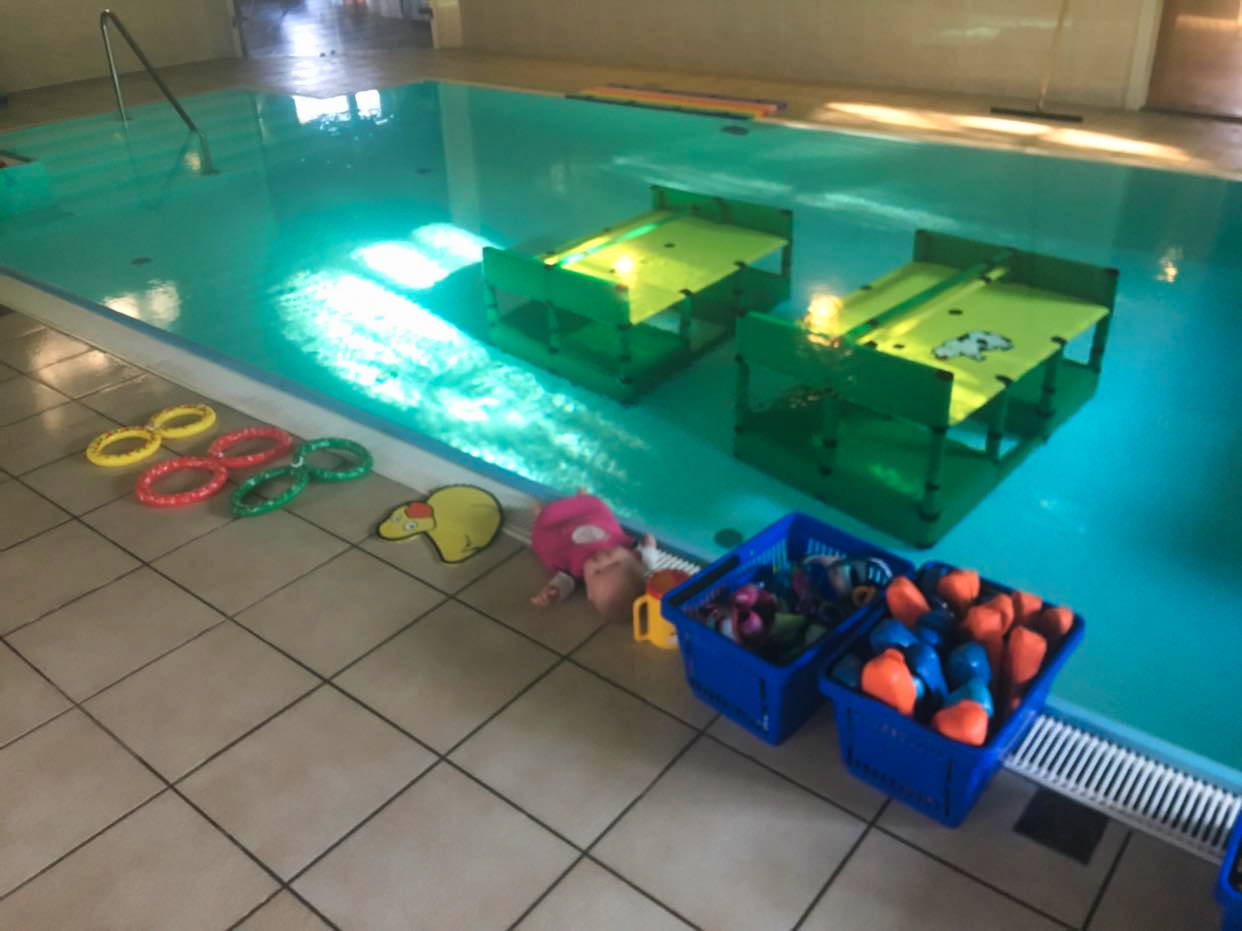 In Horst, near Elmshorn in the German state of Schleswig-Holstein, no one had ever heard of this method of teaching before. It can also be quite unconventional at times – the children were puzzled when one day, the instructor asked them to get into the water with all of their clothes still on. “Emergencies usually happen when you aren’t wearing your bathing suit,” Alina comments. At first the children found it unusual to get into the water in fully dressed. “Will I actually be able to do what I’ve learned so far?” was the question on everyone’s minds. Everything felt so different; the sense of uncertainty was palpable. But soon they realized that they definitely could. And when the kids were allowed to come out in costume for Halloween, there was no stopping them. They had a great time. This is one of the reasons why Alina has a long waiting list, even though she doesn’t even advertise. 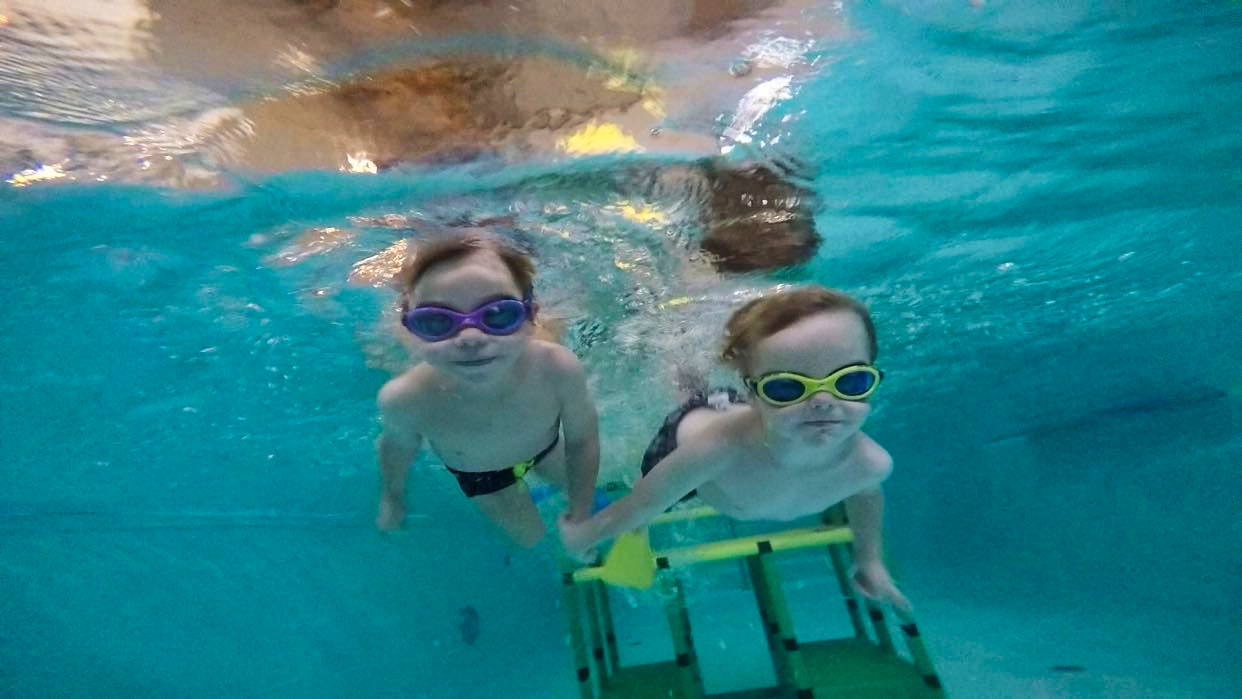 Everyone is welcome at Otterkids, even children with physical or mental disabilities. To be able to teach these children effectively, she got certified as a “Swim Whisperer.” And sometimes even parents with older children pay her a visit and want to enroll them in Alina’s swimming lessons – namely when their younger child who already learned to swim with Alina is better at it than the older one. This has happened before, too.

The likeable swimming instructor has a mission: she wants rotational swimming to become more widespread in Germany and in Europe, so that all children, young and old, are safe in the water – and parents can finally breathe a sigh of relief.

For more information on why swimming is so important, check out our blog post “A Pool with a Slide: Lots of Fun, Essential to Development”.

To learn more about Alina’s Otterkids, visit her website here.