Christine Niemeyer works as an engineer at a manufacturer of paint concentrates. She has played a key role in making QUADRO what it is today. We talked to her about the strength and durability of QUADRO parts and about the ups and downs of the company. We also learned first hand what the saying “quality has its price” really means.

Christine Niemeyer[1]: It’s really good. I’m passionate about the product and think it’s really great. One reason is because we’ve put as many cool features as possible into QUADRO while refining it over the years. My family has had a QUADRO unit at home itself since 2012, which we kept indoors at first but has been outdoors since 2016. You can imagine it gets exposed to snow, rain and extreme sun. Over the years, the kids haven’t managed to break even one tube, even though there were sometimes ten of them jumping on it at the same time when their friends were over. If you want to keep delivering good results at work and don’t want to lose interest in your job over time, you really have to believe in the product you’re working on: after all, work today is not without stress. 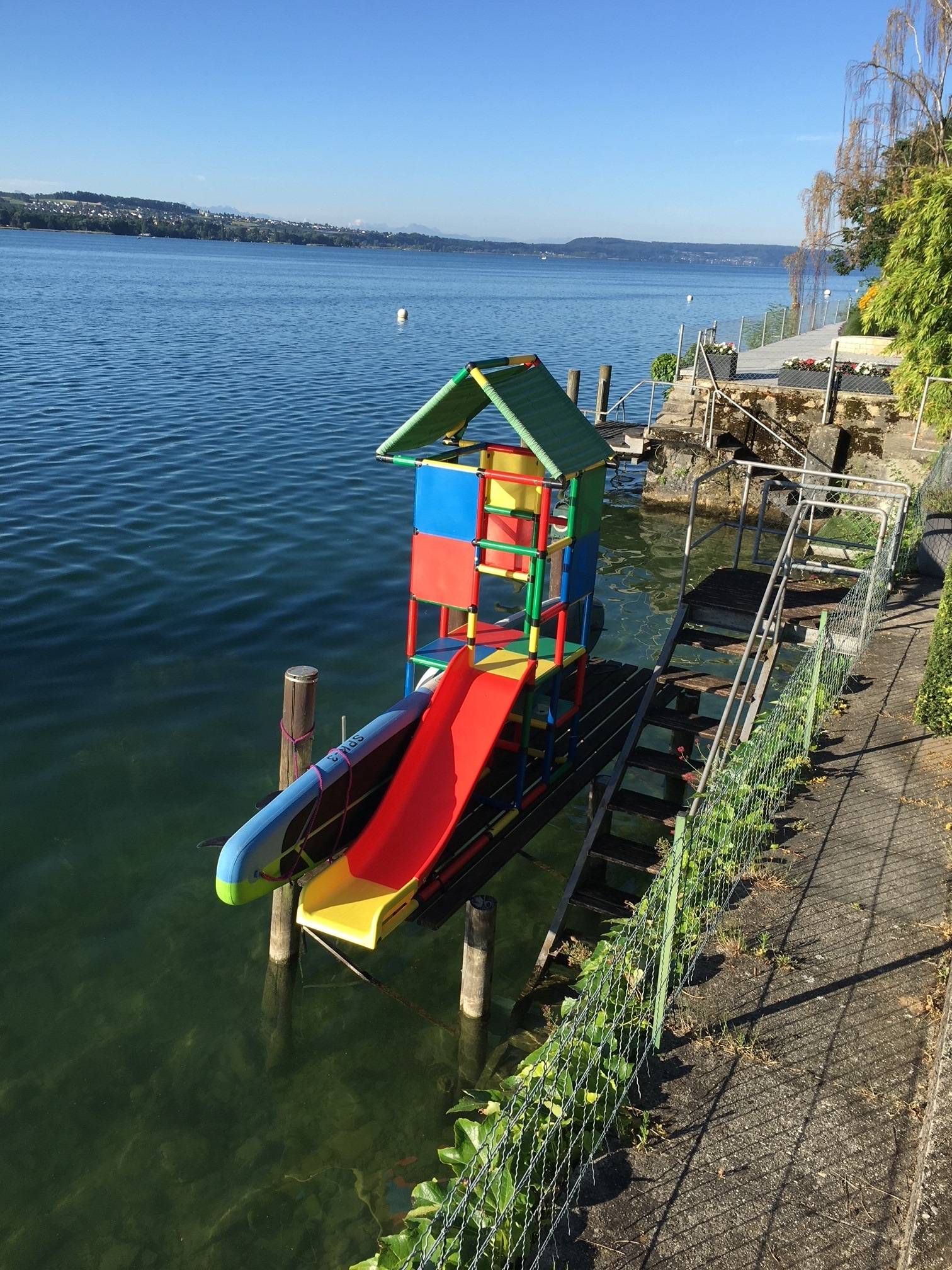 How did you start working with QUADRO?

After I finished studying engineering, I first worked somewhere else, then I switched to the company I’m still with. I’ve been working here for 27 years, and in that time I’ve been developing QUADRO parts and colors with the family of the current QUADRO managing director and a large partner company that still works with QUADRO. Since then, we’ve always further developed and adapted the product to what was required of it.

What were some of the things you experienced over the years?

At some point, for example, pigments containing heavy metals were banned for coloring plastics. That was quite a challenge, because lead and cadmium in particular have a stabilizing effect. On the one hand, they protect the plastic, but on the other hand they also protect the colors. This resulted in a vibrant bright red or yellow, which also lasted forever. When we switched to the heavy metal-free models, the first thing that happened was that the jungle gyms and slides lost a lot of their color after two years. Of course, people didn’t like that; after all, they spent a lot of money on it – and then after only two seasons, the jungle gym was no longer as attractive as it appeared when it was bought. So we had to quickly come up with something new.

How did you come to terms with the problem?

In 1996, we readjusted the colors, but were still not satisfied because even then they faded after a certain time. That’s why we adapted again and continued developing the pigments. Especially for the QUADRO Classic Series, color brilliance plays an important role because these are truly vibrant colors. The most difficult thing in this case is to achieve a permanently bright yellow. But even here, for lightfastness, we have reached level 7-8, which means “excellent” to “outstanding”. What we we are talking about here is the resistance of colors to illumination, for example to UV light.

In addition to lightfastness, what other criteria are decisive when coloring plastic?

It is not too difficult to achieve best results for lightfastness. It is more difficult with weather fastness. This is about how adverse weather influences affect the materials. In this area, too, we had to test a lot before we arrived at the current, much more than satisfactory result.

Are there any other criteria that matter when it comes to plastics?

Another decisive factor is the strength of the jungle gym. This means that a child can jump around on it, but it must not break. Here, too, a fine balance was required. Actually, polyamide 13 would have been the ideal plastic for the requirements. However, it is four times more expensive than the plastic we finally decided on. Of course, these costs would have ended up paid by the end consumer, so it was not a viable solution. A saleable product was needed, a mass-produced plastic that we would then really get everything out of. In the end, we decided on polypropylene.

What happened next once the plastic had been selected?

On the one hand, we now use a color batch for the polypropylene, i.e. granules with colorants that are also used in bridge construction. This is how we achieve additional stability. We also had to fine-tune and evaluate various options to ensure that the product was also suitable for children. So we couldn’t just take the same tack as we do in the automotive industry, for example, where many things that are important in the toy sector don’t play a role. For one thing, the material had to comply with the German food standard – in case the child sucks on or chews the toy. But such standards are extremely restrictive when it comes to stabilizing the tubes and plates. 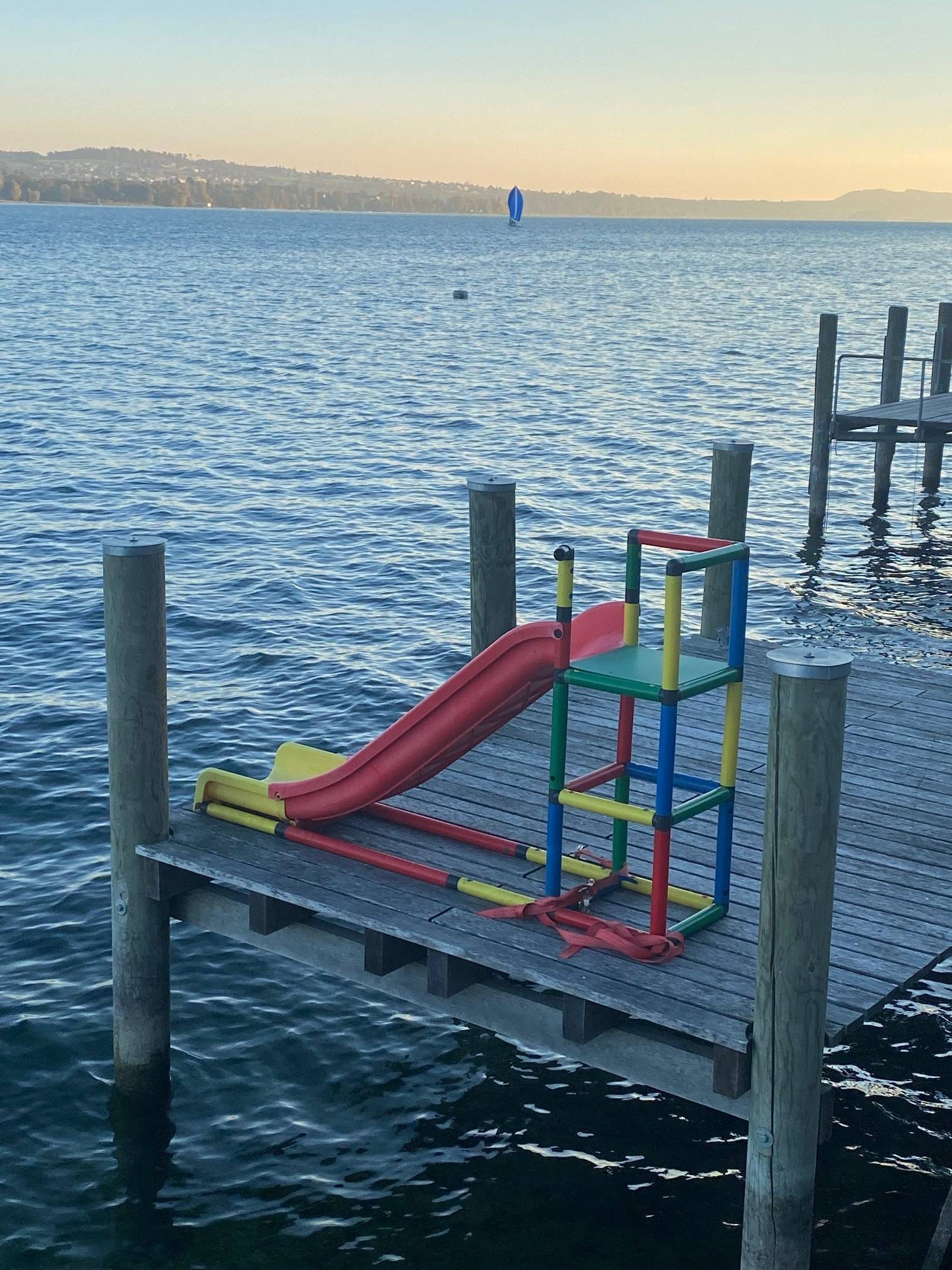 What else needs to be considered for plastic produced for the toy industry?

Aesthetics are also important. The jungle gym should look warm and cheerful, not sad or dirty. And that’s where it gets tricky: There are suitable pigments for achieving good weather fastness, but unfortunately, they are not right for children because they look dirty. Weather fast pigments are often not pretty. Brilliant pigments, in turn, are often not weather fast. There’s always a tradeoff; every aspect must be considered.

What did you decide based on these considerations?

I think we have managed something like squaring the circle. The result is what you see with QUADRO today, how I’ve experienced it as a mother. The jungle gym I mentioned at the beginning has been standing outside in the lake for over five years, exposed to the elements. Here in Switzerland, it often snows, it rains every now and then – and then we also have the glaring sun. Of course, the colors have faded a bit; it’s hard to imagine how that wouldn’t happen, and yet they are still clearly visible. The model is stable in any case. In the meantime, we have even added on to it because the children have grown. I think the extra cost on the raw material side for the paint batch is less overall than the performance you get in the end, considering you get a product that lasts forever. Things that break quickly are out of date anyway these days.

Yes, at some point the trend emerged to make everything cheaper and cheaper. Many well-known companies did not survive this phase, because of the cost pressure from Asia. I still have a raclette set from a well-known manufacturer at home. At the time, we paid 100 D-marks for it; that was quite an acquisition at the time. Nowadays, you can get something similar at the discount supermarket for a few euros. But my raclette pans still hold, and they are not bent a bit. The bitterness of low quality remains after the sweetness of low price is long forgotten.

And what do you think of new trends on the market, such as biopolymers?

I’m not a big fan of biopolymers. It’s true that they decompose over time, but hardly anyone takes into consideration how much energy really has to be used for their production. There are also attempts to produce plastics from corn and sugar. But with hunger a real issue in many parts of the world, I don’t think that’s a good idea. Food is needed more urgently elsewhere , not in the plastics industry. Polypropylene, on the other hand, can be incinerated cleanly – the energy that is produced is in turn recovered through the principle of energy recovery. Or the polypropylene can simply be reused after it has been melted down. But maybe it won’t even come to that, because the product lasts a very long time. I consider a toy that can be used for as many years as QUADRO is used to be truly sustainable.

Thank you for the conversation, Ms. Niemeyer.

[↑] Name changed by the editors.